29 years ago I was born in Berkeley, California, attended Berkeley High School and then later the University of California at Santa Cruz (including a year abroad at Leiden University in the Netherlands), graduated in 2009 with a bachelor’s in Philosophy, moved to Massachusetts for a while, bounced up to Portland, Maine, and then finally moved to Washington, DC where I make my home today. My parents are back in Berkeley, my older sister is in Southern California, and I have a girlfriend who helps remind me where I parked my car. 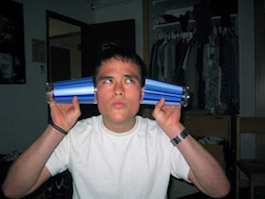 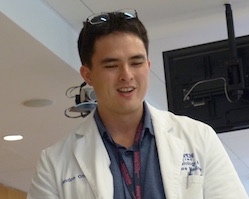 My interests are all over the map. Some highlights:

For several years after finishing college, I worked as an EMT-B in the private sector (initially in California and then in the Greater Boston area). This eventually led me to Physician Assistant school at the University of New England in Maine. After graduation, my girlfriend’s work brought us to Washington, where I spent a year commuting to Baltimore for a post-graduate critical care residency at Johns Hopkins. Nowadays I work in the SICU at a busy trauma center outside DC.

Medical education has always been of interest to me, and although I’ve taught and precepted in person, most of my work has been in the written word. I run Critical Concepts, an educational site for critical care topics; before that during my EMS tenure, I ran EMS Basics, a similar project for EMS providers. This was an active sideline for several years, eventually growing to include the digital city of Scenarioville and a prehospital EBM resource called the Digital Research Library. This trend of freely available online medical content, affectionately referred to as FOAM, is exciting to me as both a learner and educator. However, I’ve also contributed to the commercial trade journals and the peer-reviewed literature.

I have an interest in cardiac arrest and resuscitation, and am involved with coordinating and supporting the HEARTSafe Communities concept. I’m also passionate about physical diagnosis, systems of care, patient advocacy, and rational evidence-based practice. Nowadays, although I continue to follow prehospital and emergency medicine, my focus is on critical care, where I am particularly interested in trauma and shock, the physiology of mechanical ventilation, ICU delirium and the post-intensive care syndrome, and point-of-care ultrasound. ECG interpretation is also an old hobby of mine.

Back in late ’07, I was drawn into the inchoate CrossFit training system, which laid the groundwork for a variety of athletic interests. Although my focus has wandered in several directions, nowadays it consists mostly of strength training in the powerlifting tradition. Some of the projects I developed while involved with the extended CrossFit community are available here. As for my personal training, here’s a rather outdated log of some old PRs and videos. At different times I’ve also rowed, done gymnastics, and played tennis competitively.

I’ve been involved in some form of martial arts for a good part of my life. As a child, I studied Isshinryu karate, and in high school I dabbled in Jeet Kune Do, escrima, and pentjak silat (a personal style of my instructor Neal Bryant in San Francisco, but heavily based on mande muda, via Guy Chase). I have fenced, both freeform (in the SCA and Renaissance Faire format) and piste. Nowadays I don’t do much, although I’d like to find the time for a little fencing again.

I’ve been writing for a long time, in a variety of styles, but nowadays mostly non-fiction for professional purposes or for education.

During college, I developed an interest in locksmithing and lockout work, and eventually founded and ran a lockout service in the Santa Cruz area called Rapid Entry Locksmiths. It shut down when I moved to the Netherlands and never got going again.

I’ve always read a lot, not so much in high school, more again in college, and nowadays whenever I can find the time. When I was a kid my interests were mainly science fiction and some military fiction, probably because that’s what we had around the house. Nowadays I’m into some science fiction and fantasy, some mainstream stuff, some classic literature, and poetry (a few favorites are Blake, Cummings, and Eliot). Some sample favorite-books-of-all-time are Once a Runner; People Care; and Cyrano de Bergerac, the Brian Hooker translation.

For any other questions, feel free to drop me a line!